A daily blog on the thrills, spills, and frequent absurdities of the world's one and only 'non-imperial empire' - as Barroso himself called it - the European Union. 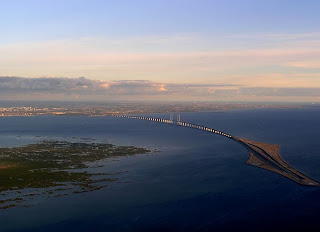 A sign on a grassy verge reads 'Sveriges första Fairtrade city. Välkommen!' This is Malmö, Sweden's southwesternmost city, just across the water from Denmark. At first glance it is an unassuming place, bearing the scars of industrial decline beneath a modern, glitzy veneer of ecofirms and cultural centre. Home to both a well-established Jewish community, founded by survivors of the Holocaust, and a far larger number of itinerant economic migrants from the Horn of Africa, it was one of the first cities in Sweden to adopt 'multiculturalism' as an official policy, under its social democratic mayor Ilmar Reepalu. This is how it presents itself to the outside world: as a shining beacon of 21st century idealism, indulging in ecologism and immersing itself in cosmopolitan culture, the place to go if you want to sample the world from the window of your hotel room. The BBC clearly fell for the hype.

But, in truth, Malmö is increasingly becoming known as a centre for sectarian division and a flashpoint for inter-ethnic conflict. It hit the headlines in 2010 after shootings by an anti-immigrant gunman claimed one life, and before that after it almost single-handedly earned Sweden two titles: one of ten countries worldwide where religious hostilities are increasing, and that of 'rape capital of Europe,' with incidence of the crime almost double that of runner-up UK. Many of these crimes have racial or religious motivation. Along with less serious crimes, such as robbery and theft, it is seen as an 'act of war' against mainstream Swedish society, inflicted by groups of migrants from Somalia and North Africa on unveiled Swedes 'asking for rape.' An investigation into violent crime at Svea high court by lawyer Ann Christine Hjelm found that over 85% of convicted rapists were 'born on foreign soil or from foreign parents,' and, before you reach for the unsubstantiated stock response of 'she must be a racist,' the National Council for Crime Prevention came to a similar conclusion (this was reported 'on Swedish radio,' admittedly according to Fjordman).

There have been frequent violent clashes between immigrant youths and the authorities, prompting the police in the infamous district of Rosengard to introduce compulsory Arabic classes and the fire services to refuse to go into the area without an escort. Jewish cemeteries have been set on fire, crowds have surrounded synagogues chanting 'Hitler, Hitler,'  and physical violence against the Jewish community has reached unprecendented levels; the Simon Wiesenthal Centre issued a travel advisory for the area, a measure usually reserved for conservative Islamic countries such as Turkey. To top it off, Reepalu - still in power after fifteen years, and widely accused of anti-Semitism after a string of off-the-cuff remarks - has done next to nothing to prevent the attacks, labelling them legitimate responses to Israeli action in Gaza.

Now, it appears that Reepalu is about to get the boot, following an interview with NEO Magazine in which he claimed that the Jewish community had been infiltrated by the Sweden Democrats, a genuinely far-right party borne out of that country's neo-Nazi movement. The country's Jews angrily countered with a letter to party head office. Pledging not to tolerate 'bullshit,' Lena Posner-Körösi, chair of the Jewish Community in Stockholm, told party leader Stefan Löfven that Reepalu has lost all 'credibility among us Jews in Sweden,' to which he replied that he 'can understand their reaction and I want to be clear. It's never okay when our representatives are seen as being unclear when it comes to people's equal value.' A meeting between the two is scheduled for later today, and Reepalu's career hangs in the balance. His departure would not only mean a reprieve from anti-Semtic statements for the city's Jewish community, but perhaps from the doctrine of multiculturalism, the failure of which has turned it into Sweden's Glasgow, and left it with all kinds of social and economic problems. Perhaps someone, without a fish supper on their shoulder, can turn the city around from the segregated, sectarian place it has became.
Posted by Gallowglass at 09:37

Quote of the Day

'That is the essence of post-national Europe' - Andrew Duff, MEP for the Liberal Democrats